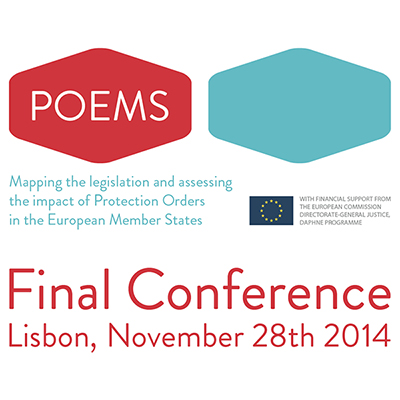 The Conference on Protection Orders in the EU Member States will be held in Lisbon (Hotel Olissipo Oriente), on the 28th of November 2014.

Victims of intimate partner violence, stalking and domestic violence often have a need to be protected against (repeated) violence by their offender. Protection orders may provide such protection, but currently we know very little of the manner in which they function on paper and in practice.

During the conference the results of the Daphne III project ‘Protection Orders in the European Member States’ (POEMS) will be presented. This project aimed to make an inventory of protection order legislation and practice in the Member States, to identify best practices and possible gaps, and to evaluate the level of protection offered to victims. Also the recently introduced European Protection Order will be discussed in the light of the results of the POEMS project. The ultimate goal is to enhance the protection provided to victims. How can current laws and practices in relation to protection orders be improved?

Faced with a situation marked by the decline of Portuguese society, coupled with the increasing difficulties victims of crimes must cope with and its impact on their families and friends, has made APAV increase its support services. Taking into consideration some isolated Portuguese regions, local services are urgently needed. In this sense, APAV, supported by its Strategic Plan 2013-2017, has managed to acquire funding from EDP Foundation in 2013 to form the Integrated Design System Response Project to Support Victims of Crime.

The project launched in October 2013 and aims to create at a national level an integrated system that permits an effective screening of identifying the risks victims of crime are exposed to. Based on this criteria, this system then adjusts in response to each individual victim’s needs, as well as including the respective victim’s family and friends. This project intends to qualify and improve the Victim Support Line | 707 200 077, and APAV provides a technological information system management and support of the telephone service for this account, with the support of the REDITUS company. We are now running our new phone schedule for the Victim Support line, from 9h to 19h on weekdays, and from 10h to 13h, on Saturday.

The Secretary of State of Parliamentary Affairs and Equality, Teresa Morais, visited and inaugurated the new Centre for Shelter and Protection CAP SUL - for victims of human trafficking.

The newly opened Centre for Shelter and Protection aims to give a more humanized and qualified answer to women, with or without children, victims of human trafficking and helps giving a wider geographical coverage for temporary structures of shelter to those victims. It has a capacity of 8 places.

On the 30th of June, APAV participated in a public debate held in the auditorium of the Portuguese Parliament. Organized by the Parliamentary group of the party Bloco de Esquerda, the debate discussed crimes of rape and sexual coercion, which is the object of the bill n.° 522/XII from this party.

More specifically, the issues at stake were essentially about the public nature of rape crimes and the reversal of the paradigm ‘no consent’ for the fulfillment of legal types in question. APAV expressed at the beginning of the debate a summary of the positions that the organization took regarding the two main topics discussed.