A seminary dedicated to “Access to justice for crime victims in the EU”, organized by the European Research Area (ERA), will be held in Trier, Germany, on 10th and 11th April. The event will have ten speakers from different european countries, being Portugal represented by João Lázaro, APAV’s President, and by lawyer Henrique Martins Gomes, from Carlos Pinto de Abreu Associates.

The meeting’s main goal is to analyse the new EU legal provisions considering the implementation and judicial practice in the Member States regarding the procedural safeguards and access to justice available to crime victims in the EU, with emphasis to in cross-border cases.

Therefore, as key topics we highlight the effective exercise of rights in criminal proceedings, access to justice in trans-national cases, support and protection measures and the European Protection Order.

Victim Support Europe will promote the 2014 Annual Conference and General Meeting in Warsaw, Poland, on 14-17 May 2014. The conference will be an opportunity for member states representatives, academics and victim support practitioners to come together and exchange best practices regarding the implementation of the EU directive on victims’ rights.

The key topics for discussion and debate will include quality and standards in victim support, next steps to successful delivery of the EU directive on victims’ rights, capacity-building for victim support organisations as well as new challenges and victim support beyond 2015. 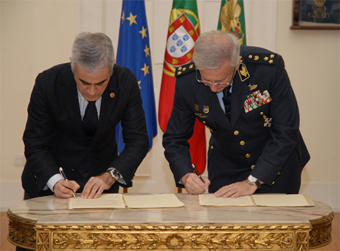 APAV and GNR (the National Republican Guard) signed on the 20th of December, in the General Command of GNR, Headquarters of Carmo, in Lisbon, a Cooperation Agreement with the aim of regulate and formalize direct and reciprocal cooperation between the two entities, in an effort to improve the conditions to better support, assist, inform and protect victims of crime. The GNR was represented by its General Commander, Lieutenant General Newton Parreira, and João Lázaro represented APAV as President of the Board.

The enhancement of the cooperation between these two institutions aims at, among other things, establish best practices as models of action to be applied in what concerns information to victims of crime and referral to victim support after the first contact of victims with the police; set up a referral system of the victims of crime that contact GNR to APAV’s victim support schemes complying with the applicable legal provisions; participation of the organisations in each other’s training programs, both as trainers and as trainees; mutual cooperation in actions and projects in the field of victim support developed by each of the institutions, including studies and seminars and projects co-financed by both national and European fund lines; regular technical support, according to the needs felt and the logistic and technical capacities; sharing of relevant information in terms of victim support and cooperation in situations of psychosocial support to victims of crime, terrorist attacks, serious accidents, catastrophes, national disaster and other critical incidents.

One of the EUCPN's main tasks is to arrange an annual conference for sharing and disseminating experience and knowledge of best practices in preventing crime and increasing safety and security in EU Member States. The conference is always held in connection with the European Crime Prevention Award (ECPA) contest.

Policymakers, practitioners and researchers from all EU Member States, candidate countries and relevant organisations are usually present at the conference.

The conference consists of lectures and seminars and one important element is to present and discuss the projects nominated for the ECPA contest each year.

The theme for the 2013 ECPA and BPC is "Prevention of domestic violence". The EPCA and the BPC will take place between 10 and 12 December in Lithuania, in cooperation with the Lithuanian Presidency of the Council of the European Union.

"After thirteen years of operating in the city centre, the Portuguese Victim Support Association’s (APAV) Albufeira branch of is now located in new facilities conceded by the local council.

APAV Albufeira’s new office is located in the Habijovem urbanisation, where it will continue to receive and counsel victims of crime, abuse and violence of all ages and walks of life.

Over the past 13 years the Albufeira Victim Support Office has provided support in 2,470 cases; last year alone it attended 453 people who turned to it for help, the majority of whom were the victims of crime.

Its new facilities were inaugurated last Wednesday and counted on the presence of Albufeira Mayor José Carlos Rolo, and the president of APAV João Lázaro.

“These facilities meet an old aspiration to better serve the community of Albufeira, more specifically the victims of crime and abuse. This space will allow us to increase our number of volunteers and, consequently, help more people with regards to preventing and intervening post-crime” João Lázaro said.

He also revealed that APAV is looking to develop a pilot project with the Albufeira GNR police force to offer support to tourists who are the victims of crime.

APAV has been operating in Albufeira since 2000 following a protocol that was signed between the association, the local council, and the GNR. It is a registered private social welfare association (IPSS) that has as its main mission supporting the victims of crime, their families and friends by offering free and confidential quality services.

Since its founding the association has noted a significant rise in the number of people resorting to its services of emotional, psychological, legal and social support, taking care of some 220 processes per year, involving some 500 people including various authorities such as the PSP police, GNR police and the CPCJ child protection committee."