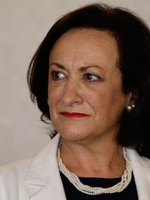 Joana Marques Vidal was sworn in last October 12th as General Prosecutor by the President of the Portuguese Republic.

Holding a Bachelor degree in Law by the Faculty of Law of the University of Lisbon, Joana Marques Vidal was general prosecutor assistant. At the time of the nomination she was the representative of the Public Prosecution in the Regional Section of Azores’ Audit Court. Expert in the area of Family Law, the prosecutor was president of the Portuguese Association for Victim Support (APAV) since 2007.

Besides Joana Marques Vidal’s undeniable technical skills and personal qualities, her courage facing every new challenge should be highlighted. The whole APAV team publicly addresses its congratulations for this nomination and whishes her best success.